The review can be found at the Wings Of Death website:
https://www.wingsofdeath.net/Reviver-A-Thousand-Lives

Reviver is a Dutch heavy metal band formed in 1997. After the usual route of two demos and two EPs, the band came out with the self-titled debut album Reviver in 2005. The album was well received in the local underground scene, the way was open for a steady rise. However, it remained deafeningly quiet. Until 22-02-22, when out of nowhere (at least for me) Reviver released their second album: A Thousand Lives.

On this new album, Reviver completely revives classic heavy metal. The thin screams, the traditional guitar tandem and a sweeping rhythm section form the basis for a really nice trip to the good old days. Old school is a term that has been invented for this, although I would immediately add that fortunately the sound is fairly contemporary. But the vibe that this album brings with it takes me deep into the 80s. And I definitely mean that in a positive way!

Album opener Kill The King had already been pushed forward as a video; and rightly so, because it is a very pleasant warm-up. Nice fierce guitar work, a singer in shape, varied in atmosphere and pace. Title track A Thousand Lives seems to want to add a little more, but turns out to be more of a mid-paced killer. Nothing wrong with that of course. As long as the power is maintained you will not hear me complain; although my tooth enamel has a hard time with the aaah aaah aaah’s of the backing vocals in the chorus. I can handle the lead vocals by the way, wonderfully authentic.

I also enjoy The Fearless and Hands Of The USA. At times it may be a bit too cheesy, but those are just short fragments. It only really goes wrong for me with the obligatory ballad You Belong To Me. This is where my resilience draws the line. I know, it’s part of the job on a classic metal album, but for songs like this I find the skip button the ideal invention.

The ‘compensation’ follows with Our Voice, exhilarating and catchy go hand in hand in a pleasant way here, and provided with sparkling lead and solo guitar work, I find this one of the finer songs of the album. Vocalist Van Maurik can also let loose here. After that, the real surprises are gone. The second half of the album is not inferior to the first, but by now we know what to expect. The last four tracks are no less than the first few, but offer no more unexpected angles.

Although, closing track Tell Me takes its time for a thoughtful build-up, showing some light proggy touches – I’m reminded of Queensryche or Crimson Glory – some of that progressive and yet very melodic US metal. This track is less straightforward than most of the tracks – a nice side of this band that I think they should show more often.

Anyway, A Thousand Lives is a very nice authentic metal album of their own making, which the old school fan should definitely hear! 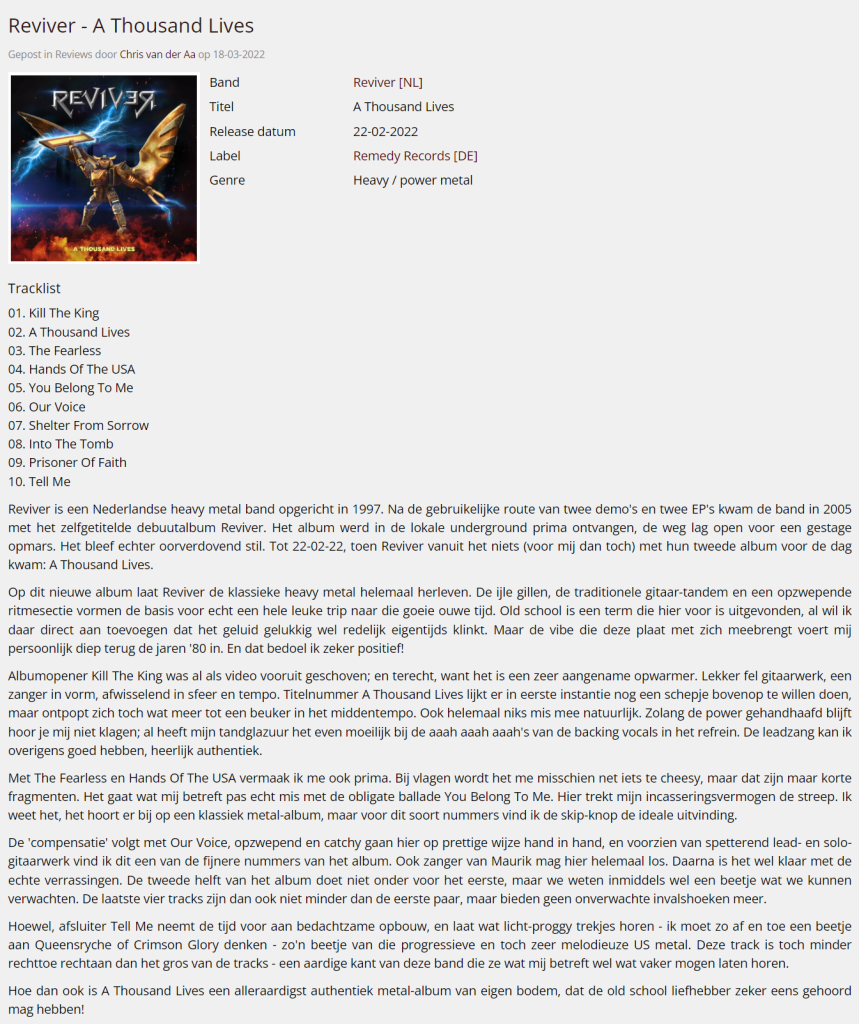