The first review of “A Thousand Lives” is there! Dutch online magazine Metal Experience wrote a very great review of the album. 85 out of 100 points!

The review can be found at the Metal Experience website:
https://metal-experience.com/reviews/reviver-a-thousand-lives-cd/

Reviver is a Dutch heavy metal band formed in 1997. After a number of demos, their self-titled debut album was released in 2005, after which the band quits a year later. The band has been active again since 2017. This resulted in a new album, no less than 17 years after the debut album. ‘A Thousand Lives’ will be released on February 22 by Remedy Records.

Reviver consists of the veterans Fred Mantel and Tom Heemskerk, who are both responsible for the guitar playing. Drummer Tom van Veenhuijzen and singer Patrick van Maurik have been active in the band since 2002 and bassist Stefan Brederode could also be heard on the debut album.

‘A Thousand Lives’ has ten new songs and lasts more than three quarters of an hour. The album opens with the song ‘Kill The King’ and which is a nice up tempo song. The guitar tandem can be heard immediately and singer Patrick van Maurik knows how to impress with his vocals and high pitched vocals.

The title track ‘A Thousand Lives’ is more of a mid tempo song, a solid heavy rocker with once again well cared for guitar work. The vocals sometimes sound a bit forced. That is a pity when you listen to what the singer has to offer. ‘The Fearless’ and ‘Hands of The USA’ are strong heavy metal songs with head and tail. The songs are nice to listen to and there is nothing to complain about. ‘You Belong To Me’ is the traditional ballad on the album and is an entertaining song in which the vocals in particular come into their own.

‘Our Voice’ is one of the fastest songs on the record. The song sounds quite surprising with a catchy chorus, strong drums. Here too, it is the guitar solos that convince.

‘Shelter From Sorrow’, the slightly progressive ‘Into The Tomb’ and ‘Prisoner Of Faith’ are all strong heavy songs where the quality is clearly visible. The closing song ‘Tell Me’ opens more quietly, but develops into a heavy song with tempo changes where the progressive of Reviver reappears.

‘A Thousand Lives’ is a strong heavy metal album which Reviver manages to put themselves back into the spotlight. With well-thought-out compositions, skilled musicians and strong vocals, the band knows how to distinguish itself from many contemporaries. 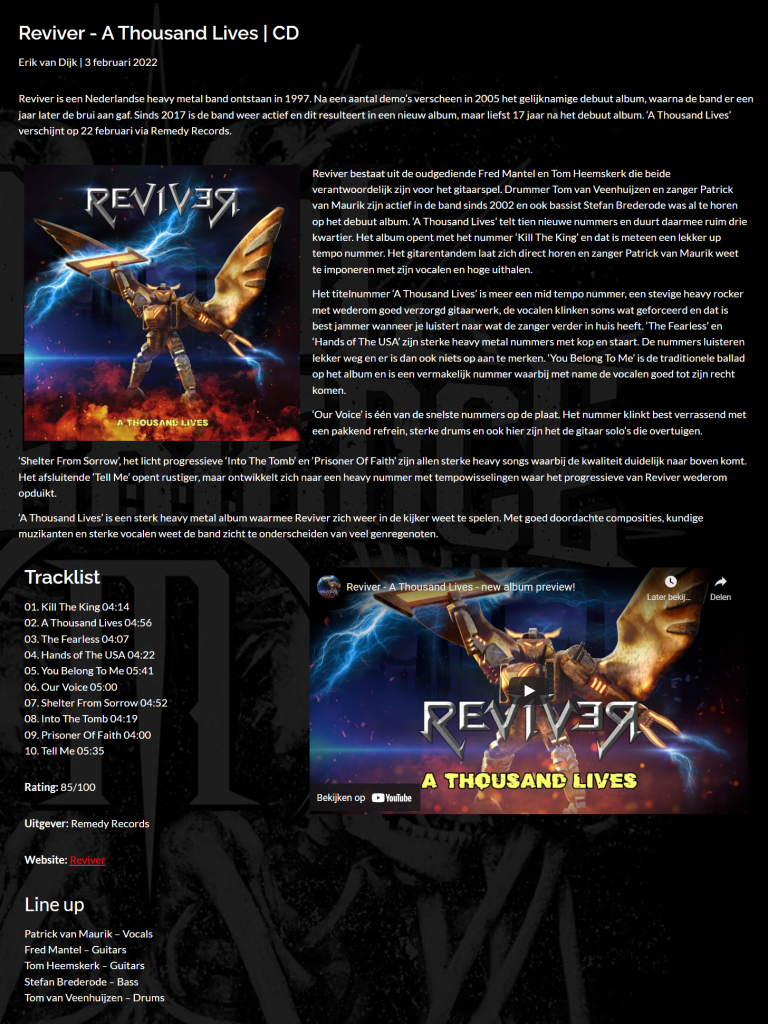